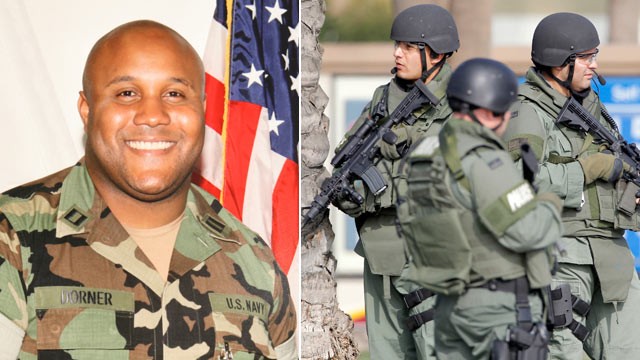 Am I the only one who finds this story crazy? LAPD are shooting innocent victims for the search of Christopher Dorner, ex LAPD who is going on a killing rampage after being fired and no one giving him a chance to plea his case.

I find it a shame that NOW LAPD want to talk to him about his case and now believe maybe there is some truth to what Dorner is saying about a false report on ‘excessive force’ after he reported that a cop kicked a mentally ill person in the head.

LAPD don’t want to talk to this man, they want him dead even though Dorner doesn’t expect to live this rampage. Dorner also claims he has information on other corruptions in the LAPD. Now there is a $1,000,000 reward for his location.

I AM NOT CRITICIZING THE LAPD as innocent people are being killed by Dorner. All could of been avoided if people take time to listen instead of “guilty before innocent”. Isn’t that the motto police and the law system are suppose to follow anyway?

Dorner wrote in his manifesto that he was forced to turn to violence because the culture of racism, brutality, corruption and cover-up continues at the LAPD. He claims he was kicked off the force after he complained about a training officer kicking a mentally ill suspect.

Braun said he had never heard of a case in which the LAPD fired an officer who reported excessive force. “You don’t go after the guy,” he said. Usually, though, other officers are quick to close ranks and shun a perceived “rat.”

He told the story of an officer who testified at the King trial as an expert on the use of force. The man said he believed the officers had, indeed, employed excessive force. His photo was tacked up at the police academy, and it became tradition for any officer who passed by to spit on it, Braun said.

Dorner demanded justice and an apology, and vowed that police blood will flow until he gets them. The manifesto names some 40 people he claims have wronged him. He wrote that he does not expect to survive his vengeful rampage.