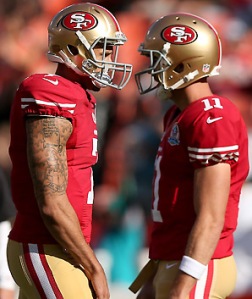 The San Francisco 49ers believe they will be trading their quarterback as soon as March 12 and the top 2 teams interested in Alex Smith are the Kansas City Chiefs and Arizona Cardinals. Word around the league is that the Chiefs are willing to give up their 1st pick in the 2013 NFL draft.

Smith did say he wanted to be released after former backup Colin Kaepernick took over and bringing the Niners to the Super Bowl, losing to Flacco and the Ravens.

The Dallas Cowboys have no yet met with Tony Romo’s agent to talk about a deal. Jerry Jones states:

“We haven’t pushed it. These things are very complicated, and it’s not necessarily complicated face to face. You go ask how a lot of these deals are done. They don’t [involve] a whole lot of talking until the time to get it done. You gather information, you see where you want to be, they get the same information we’re getting and you say, ‘Hey this is where it is.” – ESPN

Romo will make 16.8M next season which is his final season and is going against salary cap. According to ESPN, Cowboys are $20M over salary cap.