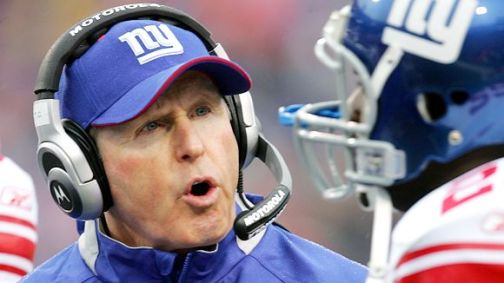 New York Giants head coach Tom Coughlin is upset with his star receiver for missing their first workout OTA (organized team activities). Victor Cruz was going to skip it of course because of contract negotiations. But we are speaking about the other receiver Hakeem Nicks.

“He should be here,’’ Tom Coughlin said with no small measure of  annoyance.

Nicks was at a charity event Tuesday night at the Waldorf Astoria, as he was  honored as a Hometown Hero at the United Way of New York City’s Gridiron Gala.  Nicks has been attending the offseason workout program and was expected to be a  limited participant in the OTAs after undergoing what last month he called “a  little minor procedure’’ on his knee following the season.

Coughlin said following the morning practice that he did not know where Nicks  was.

“Sure I did,’’ Coughlin said when asked if he expected Nicks to be at  practice. “I expect everybody here.’’

Eli Manning, NYG quarterback, spoke about it as well:

“I’m going about my business and working. Hopefully we’ll have as many of our  guys who are going to be playing for us this year out there and working and  trying to get better.