Former NFL tight end Aaron Hernandez is being held without bail in jail for the murder of his friend, Odin Lloyd. Two other suspects have been arrested and one of them, that being Carlos Ortiz, is telling all.

Hernandez does have supporters like his former Florida Gator teammates, twins Maurkice and Mike Pouncey. They wore “Free Hernandez” hat at a Miami birthday party and its been all over social media (pic below). What’s crazy about this is these two were formerly linked with him in another murder years ago:

The Pounceys have been linked to Hernandez’s off-field activities as police  continue to probe Hernandez’s past for clues relating to current murder charges  he faces. In 2007, the Gainesville (Fla.) Police Department mentioned the  Pounceys in a report after investigating a double shooting. Police wanted to  speak with Hernandez about the shooting but he invoked his right to have an  attorney present. No charges were ever filed. – NY Daily News 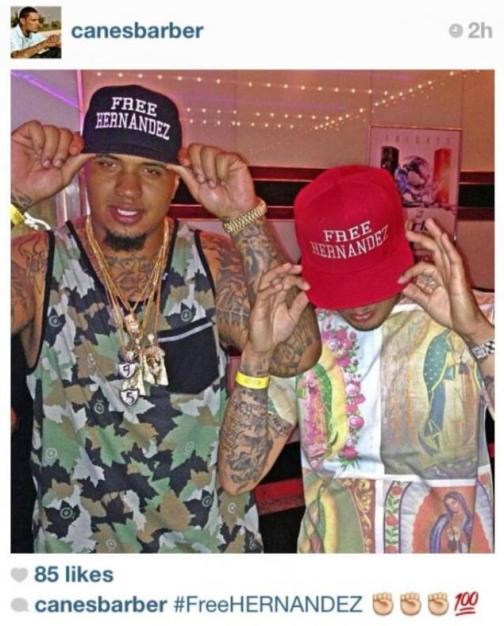