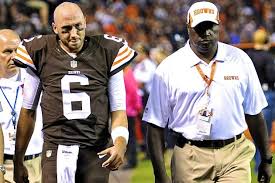 Cleveland Browns GM Ray Farmer priority is this upcoming NFL Draft but the urgency is not for a quarterback like many would think.

According to NFL.com, Farmer is more worried about getting his quarterback Bryan Hoyer through rehab and back to 100%. Hoyer tore his ACL during the Browns winning streak last season. That streak of course ending when Hoyer went down.

Browns will have the number four pick in the draft. Farmer stated:
“I do know what I’d do if I was held down at the moment. It doesn’t mean that can’t change, but I currently have somebody in front.”