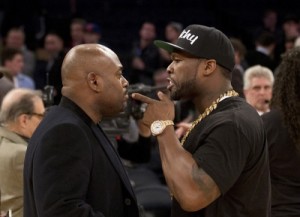 50 Cent and industry executive Steve Stoute got into a confrontation courtside at a Knicks game February 28. Nearby witnesses took flicks of it and posted it to social media causing a rucus.

This confrontation more than likely came from the interview Stoute recently had on HOT 97 stating 50 Cent is not “influential” in hip hop these days:
“He hasn’t had a hit in a really long time. He has not made anything musically that’s changed anything in a very long time. I feel like he’s always gearing up for something that never happens. Hopefully now that he’s independent and there’s no record company to blame, his aggressive content will get on the air. I don’t know.”

50 Cent has an upcoming album coming out this June.