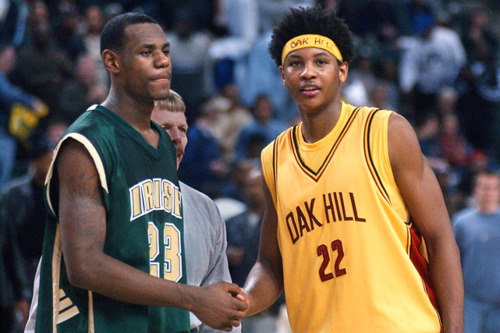 The NBA has all ears and eyes out on two star players, Lebron James and Carmelo Anthony. Seems that everything else is irrelevant in the NBA right about now, even with Lakers needing a head coach, Jason Kidd awkward trade and the NBA Draft that just happened a week ago.

Many thought Lebron James would re-sign with the Heat as Pat Riley made sure he got UCONN star guard Shabazz Napier, who won the 2014 National Title with the Huskies and in 2011 as a freshman under sensation Kemba Walker.

James spoke of the former UCONN guard several times and right after the Heat drafted him through trade with the Charlotte Hornets. James however still remains silent after his agent met with several teams.

Carmelo Anthony however is not so unsure anymore. Frank Isola of NY Daily News reports that Anthony is expected to re-sign with the NY Knicks after a max offer of $129M/5yr deal, the highest deal he can receive from any team. He is supposedly making his decision this weekend and Phil Jackson is still working on upgrading the team for Anthony and the city.