Jets only see green because its obvious they don’t see red. Chicago Bears take the win 27 to 19 at Metlife Monday night as the Jets could only score once of their seven times in the red zone.

It started from the beginning with the turnovers. Jets quarterback Geno Smith threw a pick 6 to Bears Ryan Mundy the first drive for the Jets and then the Jets fumble off the Bears kickoff, awarding the Bears great field position ending the drive with Martellus Bennett’s 7 yard pass touchdown from Bears quarterback Jay Cutler. However, the Bears were unable to score another touchdown in the first half and even though their go-to receiver Brandon Marshall went to the locker room in the 2nd, he had 0 catches.

“We were able to take care of the football and won the turnover battle,” Bears head coach Marc Trestman told reporters at the post-game conference.

Smith did get his team down field with the no huddle strategy, scoring a field goal and touchdown to receiver Jeremy Kerley, but couldn’t close out the first half with the lead when the Jets recovered a fumble from Bears quarterback Jay Cutler with 1:30 left, half time score 13 to 17.

Although Marshall came out with the team for the second half, Bennett caught a 13 yard touchdown pass from Cutler in the opening minutes of the 3rd, Bears led 24 to 13.

Everything was going Bears way as the turnovers continued for the Jets. Smith directed his team down field again to throw an interception to Bears corner Kyle Fuller in the end zone, his second of the night. The defense of the Jets interrupted the Bears drive from the turnover and received great field position after a personal foul call on the Bears in the punt return. After the dominant stop, Smith still couldn’t land a touchdown, settling for another two field goals in the second half, totaling 4 for kicker Nick Folks. 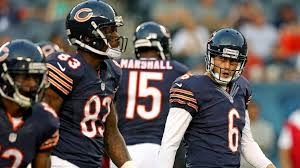 The Jets defense switched up in the 4th quarter to all blitz but Cutler was prepared with quick bullet passes to Jeffery and Marshall, his first catch of the game. Nevertheless, the Bears only managed one field goal the second half.

With 1:41 left in the game, Smith throws a 51 yarder to receiver Greg Salas to the Bears 20, another chance in the red zone and a chance to tie to go to over time. And like the whole game, the Jets offense could not score a touchdown in the end zone. Desperate Smith overthrew receiver Kerley on 4th and goal, turning over the ball to the Bears, ending the game.

Jets head coach Rex Ryan stated at the post-game conference, “We’re going to focus on getting better as a football team”.

On Monday Night Football on ESPN, NFL analyst Steve Young and Ray Lewis both agreed the Bears looked “more organized” than the Jets did tonight.

Jay Cutler was 23 of 38 for 225 yards and 2 touchdowns to Martellus Bennett and Alshon Jeffery led the game with 105 yards.

Geno Smith may have more yards with 316, but he also had 2 more interceptions as well.