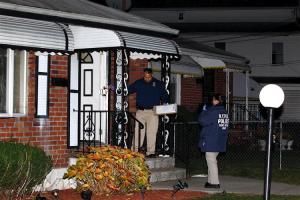 A New York Corrections officer and his wife were shot after their home was invaded in Jamaica Queens according to NY Daily News. Henry Wright and Sharon Floyd-Wright were both shot yesterday around 7 p.m. when two black males wearing hoodies pushed their way in the Mathias Ave, home.

Mrs. Floyd-Wright, 52, fought back and hit one of the men in the head with a hammer. She was shot in the left arm and her husband was shot five times in the torso. He is in critical condition with life-threatening injuries.

Neighbors say Mrs. Floyd-Wright grew up in the neighborhood.