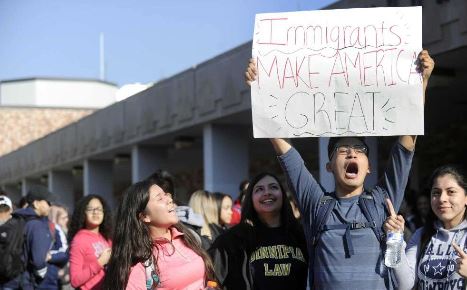 Newstimes reports that a Trump supporter who taunted minority students at Danbury High last month was not charged with any crime. Students at DHS decided to protest today by walking out of class with signs against the Trump supporter and the decision to not prosecute the man.

On January 20, the man was intoxicated and went to Danbury High parking lot after President Trump won shouting at minority students. The incident was caught on tape as you hear the man yelling “You’ll be out of the country, you f****** illegals”. He was punched by students but did not press an charges.

Reports claim that the crowd reached 300 students and was monitored by police.