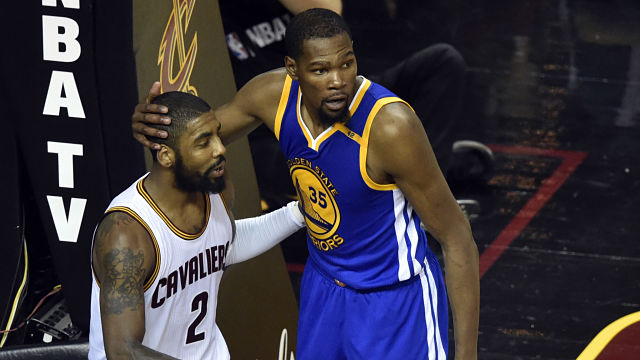 Kyrie Irving requested to get out of superstar LeBron James’ shadow and move on to his next chapter. The biggest trade this offseason involved Irving being traded to the Boston Celtics for their guard, Isaiah Thomas, Jae Crowder, Ante Zizic and Brooklyn Net’s 2018 first round pick.

Kevin Durant, who has been criticized for leaving the Oklahoma City Thunder, said on The Bill Simmons Podcast that he is proud that Irving made the move and knew what the consequences were.

“He did what he was supposed to do in Cleveland. It’s on to the next chapter.

I can really appreciate what he did. He stood up for himself. He showed a lot of courage, man, because it’s hard to take that type of criticism. When you just want to play ball. I feel him on that.”

Difference is Durant was not traded to the Golden State Warriors like Irving. Durant made his own decision as a free agent.