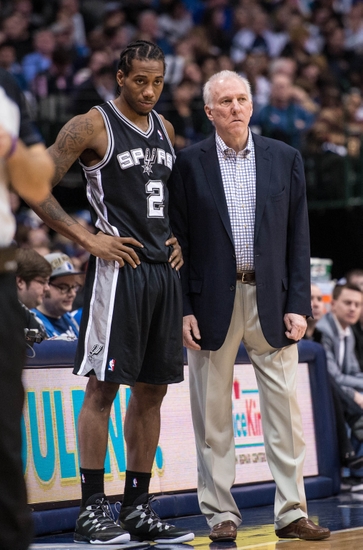 Spurs star guard/forward Kawhi Leonard has only played nine games this season, due to quad injury, and rumored tension between him and the rest of the team.

CBS Sports claimed the team and Leonard had a players-only meeting to persuade the 2-time All Star to return. Players said the meeting wasn’t about just Leonard per ESPN. Spurs head coach Gregg Popovich talked to ESPN about his expectations for his team and Leonard:

“I only talk about the things that I know, and I know he’s worked hard to get back. It’s been frustrating. You don’t think he wants to come back? You don’t think we want him back? But the fact that he’s not back, it frustrates everybody for all the obvious reasons. But there’s no blame to be placed, on him or anybody else. It’s just an unfortunate situation. So what we do, what we think about, we’re going to do what we’ve been doing. The guys that are playing, that’s who the team is. And if he got added to the team, well that’s great. But you have to act like it’s not going to happen because you have to be who you are. And he’s not with us right now. So this team has to have its own identity. That seems pretty logical. That’s the only way to look at this.”

Leonard, who signed a 5-year deal in 2015, needs to really heal his quad, shoulder and ankle, all the injuries he suffered since last season. He hasn’t fully recovered since and he has to be 100% not just for his team but for himself.  That is when we will see the return of the two-time Defensive Player of the Year.