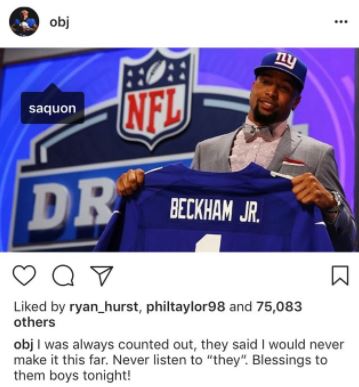 Odell Beckham Jr. told Giants fans before the draft started that Saquon Barkley was going to be the number 2 pick as he tagged the former Penn State running back on his 2014 draft picture on Instagram.

Once Barkley was selected, Beckham contacted Barkley on Facetime. This wasn’t the first time the two actually talked. Per News Day, Barkley and Beckham became close friends after the Combine:

“Odell and I started our relationship kind of in the offseason. After the Combine, I went out to L.A. to train and that’s where he’s at and we kind of just hit it off.”

Giants quarterback also contacted Barkley to welcome him to the team. Giants, who ended last season 3-13, added a veteran running back, Jonathan Stewart, this during free agency. The big blue have lacked a dominant running core since Ahmad Bradshaw and Brandon Jacobs.