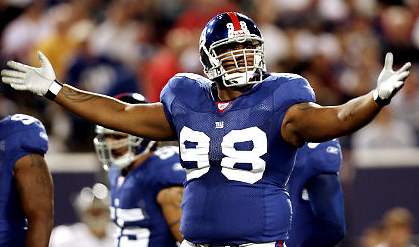 A former New York Giants player, known for his “taser dance”, was arrested in Florida early Tuesday morning after a police chase.

Per NY Daily News, 34-year old Barry Cofield fled police after the woke him up as he was passed out in his Cadillac near Interstate 4 in Lake Mary. After several attempts from the police, he woke up and fled the scene. Cops pursued and he “did not stop but did not take evasive maneuvers to avoid me” per Seminole County deputy report.

Cofield was trapped in the Steeple Chase subdivision and rammed the police car trying to get free. Police then told him to get out the car, started shattering his window before he finally got out. They found heroin inside his pocket and he refused to take a sobriety test after police smelled alcohol.

He was arrested for possession of heroin, fleeing and eluding and aggravated assault on an officer.