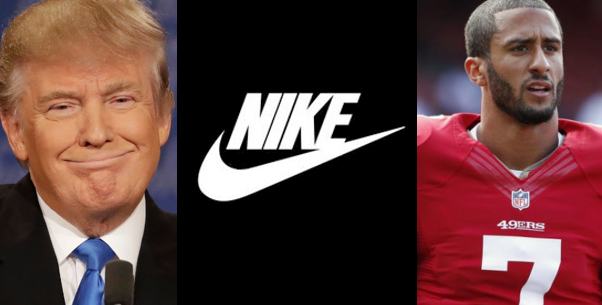 Nike released their cover for the 30 year anniversary of the “Just Do It” campaign and former NFL player Colin Kaepernick is the cover. The brave promotion made some consumers burn their Nike attire and upset many public figures who went on Twitter expressing how Nike doesn’t care about the American flag or the military.

Kaepernick has said numerous of times that the protest during the national anthem is not towards the military but to police brutality and inequality.

President Trump has been against Kaepernick and any NFL players who participate in the protest and said they should be fined and suspended even though their practicing the First Amendment. After Nike released their promotion supporting Kaepernick, he said he disagreed with it but it’s their freedom right.

“As much as I disagree with the Colin Kaepernick endorsement, in another way — I mean, I wouldn’t have done it.

In another way, it is what this country is all about, that you have certain freedoms to do things that other people think you shouldn’t do, but I personally am on a different side of it.” – USA Today

I must add that Nike are tenants of Trumps.

Nike has the right to say what they want as it’s freedom of speech according to Trump, even if he disagrees with it. Why is this not the same for the NFL players? Because they’re not paying you President Trump? You held your tongue for business measures but decline to support human civil rights?

Some reports say Trump “attacked” Nike for the Kaepernick promo but let’s be serious. This is nothing, absolutely nothing compared to the harsh and disrespectful things he has said about women, minorities and other countries.