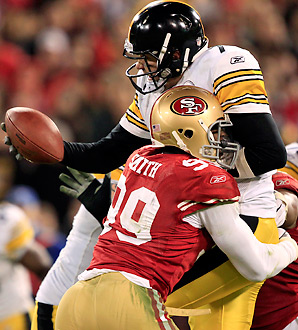 I’m a NYG fan, but Aldon Smith had me nervous in the NFC Championship game — he’s a BEAST!

But this 49ers linebacker, who was trying to stop a fight at his house party in San Jose, was stabbed in his shoulder and stomach. He’s lucky that they were just minor wounds and he has been released.