Regardless if you win a championship together, teammates will have their disagreements that get physical; especially football players.

Today at Seattle Seahawks minicamp, a fight broke out when a hard tackle left a player injured. The reason why that started a fight was because it was supposed to be a non-tackle scrimmage.

ESPN reports that receiver Bryan Walters made a diving catch while being covered by safety Earl Thomas. Walters injured his right shoulder as Thomas fell on him. Star receiver Doug Baldwin, who was being covered by star cornerback Richard Sherman, was angry about that defensive play. Sherman reacted in a negative way towards Baldwin and they both “snapped”. Sherman and Baldwin grabbed each other, Sherman ripped his helmet off and punches were thrown. 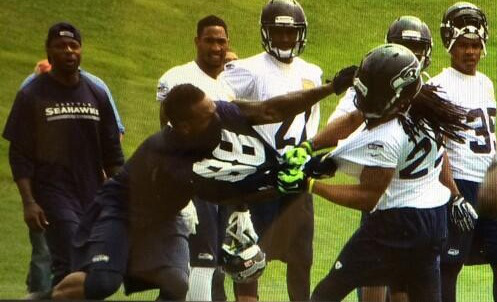 Star receiver Percy Harvin jumped into the fight pushed Sherman off of Bates as well as running back Marshawn Lynch, who was there but didn’t participate.

Baldwin also got into a verbal altercation with Earl Thomas later in the practice.

Supposedly Baldwin and Sherman talked it out towards the end of the practice.